Bill Molno shows up once again as ghost penciler for Sal Trapani in Gold Key's next to last issue (#4) of The Wild, Wild West (1968).  A number of clues point directly to his participation in the main feature, "Montezuma's Gold," including the usual presence of what I term left-to-right "action panels" (though not all such panels feature action; it's just a working term that stuck).  Here are five of them:

Then we have the face of James West (right)... 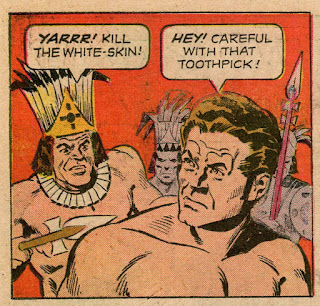 ...which also showed a year earlier (with bushy eyebrows) as the captain in Dell's Rango (p: Molno, i: Trapani): 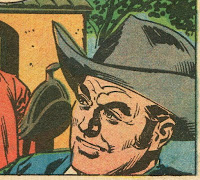 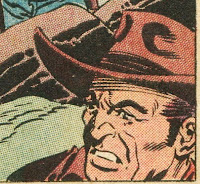 And we have a very creative reuse of a Charlton image from "A Lost Treasure" (Strange Suspense Stories #48, July, 1960).  Both depict underwater rescues by female rescuers.  Here's the Charlton "Lost Treasure" panel (p: Molno, i: Rocco Mastroserio)... 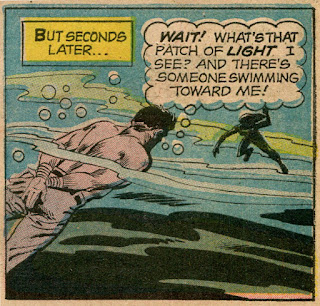 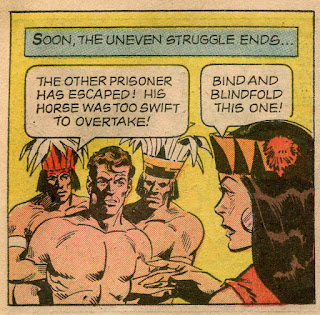 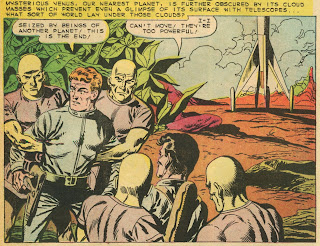 Another clue to Molno's involvement occurs toward the end of "Montezuma's Gold," where we're treated to this rather underwhelming depiction of Montezuma's treasure, which looks something like an over-sized children's sandbox:

It reminds me of this image from the Molno-Trapani "Fifth Titan" (Teen Titans #6, Nov.-Dec. 1966, DC), in which money, jewels, and wallets are treated in the same sketchy, quickly penciled (and inked) fashion.  (It's a left-to-right action panel, too)  Maybe Molno was making an anti-materialist statement: 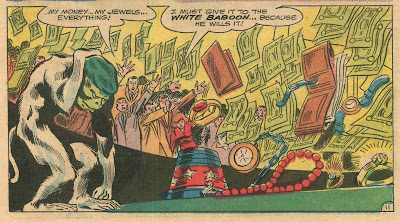 In fact, there's no shortage of line-saving tactics on display in "Montezuma's Gold"--witness the sketchy, partially obscured crowd in the Part Two splash panel: 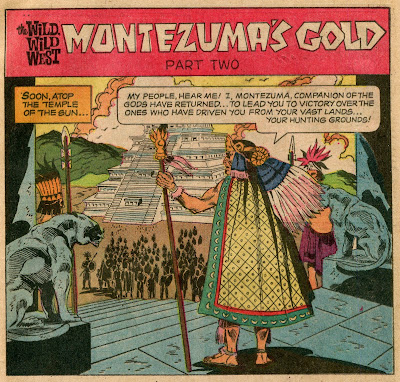 And we this cluttered but sparsely populated composition, meant to depict Jim West and Artemus Gordon in a desperate battle against a massive group of Aztec foes ("The odds are only about 10,000 to 1!" says Artemus, to the left of Jim and in Aztec disguise).  Maybe they were down to the last four by the time the action was recorded:

Most economical of all are the story's last two panels, with their less than spectacular views of our heroes' private locomotive: 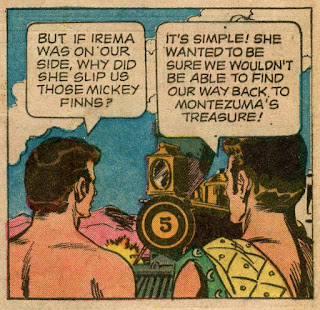 So, I think we definitely have Molno ghost-penciling for Trapani here.  Now, I should note that "Montezuma's Gold," despite some of its chintzier touches, is a highly enjoyable entry.  Despite his not infrequent corner-cutting and a tendency to repeat his images, Molno knew how to tell a story efficiently and entertainingly.  And he left some fun challenges for the art spotters of the future.

Lee Hartsfeld
I was born in Toledo, served in the Navy eight years, graduated from Bowling Green State University with a B.A. in Popular Culture, and worked for fifteen years as a Medicare claims examiner. I live in the country with four cats--Mingo, Arlo, Raul, and Calvin.